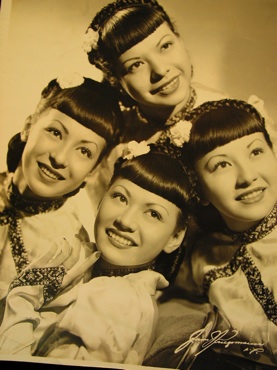 The Book: Just Us Girls: The Kim Loo Sisters

Funny, feisty, warm and thoughtful, the “Kimmies” speak their minds in a memoir that is both a moving portrait of four sisters — daughters of a Chinese “paper son” and a Polish refugee — and a vivid historical record of 20th-century America.

Told in the first person, and spanning nearly a century, their recollections include the Jazz Age, when they cut their theatrical teeth in kiddie revues in their hometown of Minneapolis; the Great Depression, which they spent crisscrossing the country following the various vaudeville circuits; and the Second World War, years spent in Broadway musicals and Hollywood movies as a trio when one Kimmie left the act to marry the son of the vice president of China and witnessed the Chinese Revolution first-hand — but not before her sisters joined the USO to entertain American troops stationed in Europe during the “good war.”  Their remarkable story — both on stage and off as well as their lives pre- and post-Kim Loo Sisters — makes an important contribution to America’s multicultural heritage and a persuasive argument for the power of sisterhood.

When the co-author of Just Us Girls discovered a treasure trove of show business memorabilia in the home of one of the Kim Loo Sisters — recorded songs, publicity and personal photos, clips from their feature and short films and home movies; theater reviews and playbills; magazine and newspaper articles — she knew that she had the makings of a documentary film to complement the book she was already writing about their lives.  These secondary-source materials, together with first-person videotaped interviews and third-party materials, including rare archival newsreel footage, paint a Portrait in Four-Part Harmony, an intimate profile of four biracial siblings who, during an era when Chinese entertainers were a rarity, performed with such notable stars as Frank Sinatra, Ann Miller and Jackie Gleason and personified, ironically, not one but two “all-American” icons — the girl next door and the pin-up girl — albeit in Chinese dress.  In addition, their long and full lives act as a singular prism, shedding light on such defining — and controversial — issues as cultural identity, immigration, discrimination, race, and gender.