We’re thrilled to announce the launch of our Indiegogo crowdfunding campaign in support of The Kim Loo Sisters documentary.

Here’s the link to our campaign page: Click Here

Seven years ago, I began making this film to share and celebrate the fascinating lives of my mother and her three sisters – the Kim Loo Sisters, a jazz vocal quartet popular in the 1930s and 40s and the first Asian-American act to star in Broadway musical revues.  As a novelist, playwright and memoirist, I’d never made a feature-length movie before, and had no idea of the enormity of the task before me.  Luckily, the strength of the Kimmies’ story attracted exceptional people in the film world, and I assembled an experienced, talented team to help guide me through making my first documentary. 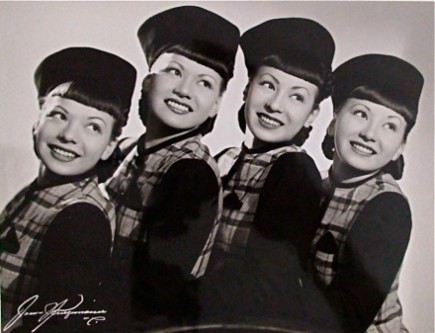 I feel extremely fortunate and grateful that Harry Keramidas, who edited all three Back to the Future movies came on board as editor of The Kim Loo Sisters.  Our consulting producer is Patricia Romeu, who won an Emmy as co-producer of the HBO documentary The Loving Story.

The Kim Loo Sisters is so important to us.  We’ve worked tirelessly as a team with a very small budget to make a film we’re very proud of and that continues to excite us.  Now we’ve launched an Indiegogo crowdfunding campaign to bring our film to the wide audience we feel it deserves.  (Indiegogo is a global website that allows you to make a donation to the campaign of your choice via the Internet.)  I hope you’ll consider becoming one of the first people to contribute to our project.

We cannot do this without you.  Please join us in making this film.  Together we can share The Kim Loo Sisters with the world.

Thank you so much!