The connection between the Kim Loo Sisters and Ukraine

My mother [doing the split] and three maternal aunts—the Kim Loo Sisters—were a jazz vocal quartet popular in the 1930s and ’40s and the first Asian American act to star in Broadway musical revues. They were also biracial. Their father Louie Shear Gim was born and raised in Toisan in southern China.  Their mother Lena Wojcik [in headdress, center of photo] was born and raised in Buchach, in western Ukraine. 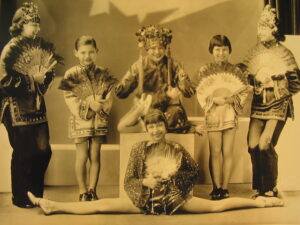 Buchach was an important market town and trading center and home to a number of ethnic groups—Ukrainians, Poles, Jews, Armenians—in a region whose borders were drawn and redrawn throughout history. In the companion book to The Kim Loo Sisters documentary, Just Us Girls, Lena’s second daughter Maggie remarks: ‘I do remember [Mama] said when the Russians, the Cossacks, came riding through Buchach—because she and her family were living so close to the border with Russia—her father was in the fields with a scythe, and the Cossacks said, “You have to leave here,” meaning they wanted his land. And he answered, shaking his scythe, “You’ll have to cut off my legs first,” meaning “over my dead body!” Meaning he would defend his farm to the end.’