First of all, I want to thank all of you who have been following the progress of The Kim Loo Sisters documentary and supporting my efforts to complete the film. It has been ten (!) years since I first picked up a camcorder and began videotaping and interviewing Alice, Maggie, Jenée and Bubbles Kim Loo. Little did I know back in 2007 that the result would be a feature-length documentary that has been given private preview screenings across the country, awarded a number of prestigious grants, included in an art installation at Gracie Mansion, and one the five finalists of The Paley Center for Media’s Doc Pitch in 2015.

I ESPECIALLY want to tha 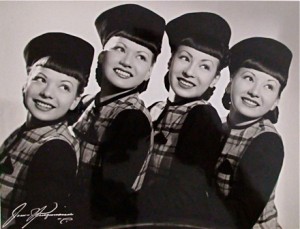 nk those of you who invited me to screen The Kim Loo Sisters in 2017 as well as the attendees of those screenings. How can I forget the exceptionally warm welcome I received from Minneapolis-St. Paul, the Kimmies’ hometown, where the venue for the event was the Mall of America — the largest mall in the country! My heartfelt gratitude goes to Pearl Bergad of the Chinese Heritage Foundation, sponsor of the screening; to Diane Richard of radio station KFAI who interviewed me about the documentary and about “the Chinese Andrews Sisters,” its stars; to the publication China Insight, which ran an extensive article about the film; and to Wing Young Huie, who invited me to participate in his larger-than-life photo exhibit of descendants of Minnesotan “paper sons,” of whom my maternal grandfather was one.

Personal highlights of my stay in the Twin Cities included visiting the spot where the Kim Loo Sisters’ clapboard house once stood — as well as the former site of the Nankin Café, “the finest Chinese restaurant in Minneapolis,” where the Kimmies’ father was headwaiter.

Many thanks to Boston’s Pao Center for the Arts for hosting a screening in their beautiful new facility in Chinatown — and the trip down memory lane. Beantown was my home after I graduated from college, and the Boston Museum of Fine Arts was my first full-time employer.

Boston wasn’t the only place in New England I called home. For a while, I lived in Saxtons River, Vermont. So when Main Street Arts offered to host a screening of The Kim Loo Sisters, I jumped at the chance. For a tiny village (population 581), the turnout was prodigious, which just goes to show how Vermonters treat their neighbors past and present.

Many, many thanks to Ted Gong and Stan Lou of The 1882 Foundation. Washington, DC was the final city on my list of screenings for 2017 — and what a fortunate choice it was! The house was packed, the audience was rapt, and the event included a fascinating panel discussion about Chinese Americans in the entertainment industry past and present.  The Kimmies were certainly in good company!

So what lies ahead for The Kim Loo Sisters in the Year of the Dog? We’re kicking off 2018 in the City of Brotherly Love with a screening on January 24th at Philadelphia City Institute Library. Next stop: the United Nations headquarters in New York City — a special private preview screening for UN delegates on February 26th. We have a few more screenings in mind for the Big Apple — dates and times yet to be determined — so please check back on this website or  the Kimmies’ FB page.

It’s an uphill climb, but we’re gaining on the amount of money we need to finish the film. Post-production costs include licenses for the songs the Kimmies sing in the film, sound mix, and color correction. We’re keen on making 2018 THE year we raise all the funds we need to complete the film.  Then we can enter it into film festivals and find a distributor to be able to screen The Kim Loo Sisters publicly to large audiences far and wide. Considering the state of affairs not only in the United States but worldwide, The Kim Loo Sisters couldn’t be more timely! (More about that in my next newsletter.)

If you want to make a donation and receive a tax-deduction for your contribution — any amount will be most appreciated! — please click here. And if you’ve already donated, the Kimmies and I are most grateful for your generous support.  Thank you so very much.

Warmly, and Happy Year of the Dog,