Happy Year of the Ram!

Happy Year of the Ram (or Sheep or Goat), Everyone!

To ring in the Year of the Ram, I invite you to take a look at THE KIM LOO SISTERS’ new long trailer that I’ll post on their website and their Facebook page on the Chinese Lunar New Year — February 19, 2015. I hope you enjoy watching it as much as the KLS team and I enjoyed making it.

According to Chinese astrology, the Year of the Ram (which ends February 7, 2016) is a good time to foster intimacy and strengthen family ties. It’s also optimum for creating art and cultivating beauty. I’m told Rams are unable to move backwards or sideways — only forward. So in your efforts to make art or build close friendships, don’t hesitate to forge ahead!

The Ram is the eighth (a very propitious number in Chinese culture) sign in the Chinese zodiac of twelve animals, the others being Rat, Ox (or Cow), Tiger, Rabbit, Dragon, Snake, Horse, Monkey, Rooster, Dog and Pig (or Boar). 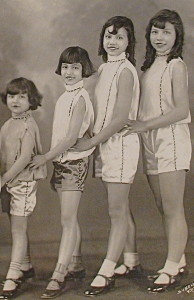 So what do the twelve animals of the Chinese zodiac have to do with THE KIM LOO SISTERS documentary? A third of these animals — Pig, Horse, Cow and Rooster are the nicknames that the Kimmies — Alice, Maggie, Jenée and Bubbles — gave each other when they were children performing in kiddie revues and vaudeville theaters.

Who was what, and why?

Why they identified each other as such is mentioned in my film’s companion book JUST US GIRLS. A collection of all the interviews I conducted of the four sisters, the book begins with their early years in kiddie revues, continues through their halcyon days on the Broadway stage and Hollywood screen, and concludes with their “third act” in life when they had careers far from the limelight and were simultaneously wives, mothers, grandmothers and, yes, great-grandmothers.

Like the documentary, the book focuses on the Kimmies’ personal and professional lives while encompassing nearly one hundred years of American history and world events. I’m in the process of editing JUST US GIRLS, which will contain a generous selection of photographs and other memorabilia. I can’t wait to share the book — and the film — with you!

P.S. Not to overlook that “other” popular February holiday, Happy Valentine’s Day!