Happy Year of the Water Tiger!

While the Year of the Rat (2020) was all about survival (indeed!), and the Year of the Ox (2021) was all about anchoring ourselves in a new reality (and what a reality!). the Year of the Tiger is a year of POWER, PASSION and DARING.  It’s about making big changes, taking a risk, and starting new endeavors. For many of us who’ve felt we’ve been under a sort of house arrest, we might feel we’re more than ready to pounce.  For those of us who’ve enjoyed the down time and solitude to attend to more interior matters, we might be ready to poke our noses out of our hibernating holes. If so, this is the right time. 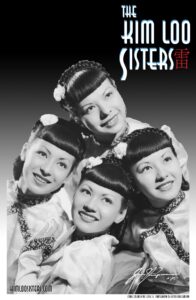 For the Kim Loo Sisters,the hiatus of the last three years meant that there were no in-person private preview screenings as in the past.  Thanks to Zoom, however, the THE KIM LOO SISTERS documentary was screened at the Philadelphia Asian American Film Festival, the Chinese Historical Society of America (San Francisco), San Diego Chinese Historical Museum, San Diego State University, San Diego Community College Department, and the 1882 Foundation, Washington, DC.  Due to the wave of anti-Asian sentiment that began with and was exacerbated by the pandemic, my colleague Eric Hung and I decided to “repurpose” the documentary to meet the wave head-on.  We pulled significant clips from the documentary, added contextual narrative, and interwove the mix with relevant photos to provide a visual and verbal story that compared and contrasted the anti-Asian sentiment the Kimmies experienced almost a century ago with the anti-Asian hatred Asian Americans are facing now.  We ended our presentation with a q&a. As minuscule as our contribution to anti-racism may be, combined with the efforts of many, many anti-racism Americans, and considering the increase in verbal and physical attacks on Asian Americans, molehills may multiply to become mountains.

That was in 2020 and 2021.  The community around the Kimmies continues to grow, slowly but surely, in 2022.  Eric and I have been invited to give a presentation at the—yes!—Rock & Roll Hall of Fame on March 16th entitled “Recovering Early Asian American Voices in American Popular Music: Two Girl Groups.”  One of which is the Kim Loo Sisters. And just about two weeks ago, author Susan Delson in a program of 24 Soundies that she presented at Film Forum in New York City said that the Kimmies were “ripe for rediscovery.”  One of those Soundies she screened? The Kim Loo Sisters singing “Take Me Out to the Ball Game.”

Will this be the Kimmies’ breakout year?  We certainly hope so!  It’s starting off on the right foot.  Or should we say — pounce!  Please return to this webpage and go to the Kim Loo Sisters Facebook page for more — and up-to-date — news.  Now that I’m back on track, I’ll be sure to add a bit about my own personal journey of the last three years