My apologies for not being in touch sooner.  Somehow, my website fell off the map! I hope you like the new one and that you’ll visit often.

Quite a bit has happened since the beginning of 2014.  The big news is that The Kim Loo Sisters documentary-in-progress has been awarded a $15,000 grant from New York State Council for the Arts.  This amount brings us that much closer to our goal of finishing our film, now in post-production.

In addition, word about The Kim Loo Sisters is spreading – and among groups as disparate as swing dance enthusiasts and professors of Women’s Studies, Asian Studies and Film Studies worldwide.

We were invited to screen a selection of clips on May 25th at the Alvin Ailey Theater in New York City as part of the Frankie Manning Centennial and World Lindy Hop Day.  In case you’re wondering, Frankie Manning was an iconic swing dancer and choreographer.  We enjoyed a great turnout, and we received positive and insightful responses to our film.

Early in April we were asked to screen a rough cut of the documentary at the Voices of Asian Modernities Project (VAMP) at the University of Pittsburgh.  This was a conference, attended by professors and scholars from all over the world — Malaysia, Singapore, and the Netherlands included.  We were a bit apprehensive about how the academic community would receive our film.  Would they think it was too “entertaining” and not serious or “socially correct” enough?  From the feedback we received, we needn’t have worried.  One professor from England told us that she found the personal history of the Kimmies fascinating and an important story to tell.  Another professor said that if we made a one-hour version of The Kim Loo Sisters, she would use the documentary in her Asian Studies course at Harvard next year. 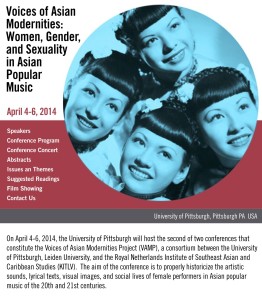 There’s a lot to do before we can show the completed film to the general public, but events such as VAMP and the Frankie Manning Centennial make the going that much smoother and take us that much farther in raising awareness for our film.

As you may know, we’ve shot and edited The Kim Loo Sisters.  We still need to raise funds to pay for music and other rights, sound mix, and color correction.  If you’d like to help us reach our goal by making a tax-deductible contribution of any amount, please click on “Kim Loo Sisters,” go to “Contribute,” and just follow the prompts.  Thank you!

To find out more about the Kimmies and the film we’re making about their lives and their career on stage, screen and radio, you can follow them on Facebook. There you’ll find the link to an interview that Minnesota Public Radio conducted of me earlier this year, as well as to a feature article in the Epoch Times about Jenée, one of the Kimmies.

We’re still in the process of tweaking our new trailer — we want it to be more expansive and expressive of the film’s storyline — which we hope to have up in the next month or two. In the meantime, you can view our film teaser here or by clicking on “Kim Loo Sisters” in the top navigation menu, then on Film Teaser.

Thank you for your patience and for returning to my website, upgraded.  It’s great to be back in touch!