As I look back over 2013, I find that there are many things to be thankful for — among them the progress that The Kim Loo Sisters has made.  And a good part of that progress is due to your unflagging support and encouragement — both financial and emotional. Thank you, all, very Much!  Thank you for coming back to my website and the Kim Loo Sisters website to see how we’re doing; thank you for visiting  the Kimmies’ Facebook Page.  I just know that there’ll be a lot more good news to share with you in 2014.

Here are three events of special note from the second half of 2013:

Many of you are familiar with the Hollywood film trilogy Back to the Future.  The editor of all three films, Harry Kermidas is also the editor and producer of the The Kim Loo Sisters.  That’s Harry, below, offering me moral support as I spoke at a tribute to the Kimmies in New York City early in 2013. 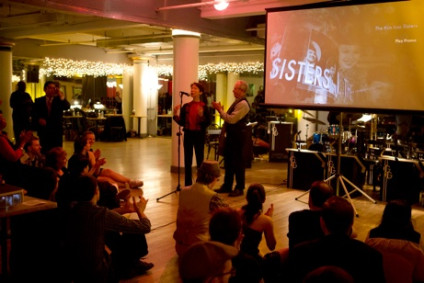 And that’s George Gee, below with his 17-piece big band, who hosted the event.  (The Kim Loo Sisters sang with a number of big bands in the 40s.) 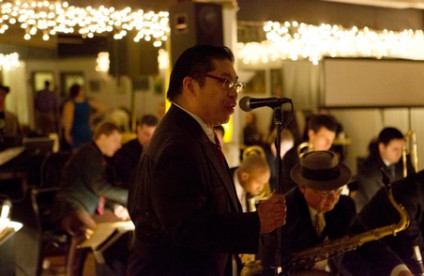 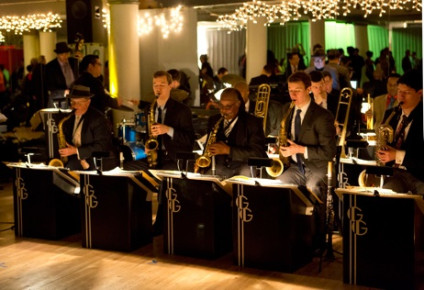 The Kim Loo Sisters — already shot and edited — continues to make progress, and the semi-official trailer is the latest piece of it.  Because we have yet to pay for the rights to certain film clips and licenses to certain songs, we’re restricted by what material we can show you — restricted, hopefully, in a very creative way: the way a haiku poem is restricted by its ting, condensed structure, which makes it all the more evocative and illuminating.  That’s what I hope our semi-official trailers will be: a visual haiku that your imagination will complete and make “official.”

You can help us finish The Kim Loo Sisters by make a 100% tax-deductible, secure online donation in support of our documentary by going to the Kim Loo Sisters website and clicking on “Contribute”.  No amount is too small, and any contribution will be most appreciated.

“A journey of a thousand miles beings with a single step.”  My single step started when I picked up a camcorder and began filming interviews of my mother and her sisters, not sure of where that step would lead.  If you take the “single step” of a donation — $5, $10, $25, more if you can afford it — the journey of a thousand miles will be achieved, and you will have made the journey with me.

Any questions or comments, please don’t hesitate to contact me at lesliedli@gmail.com.  I look forward to staying in touch in 2014.

Happy, Healthy, and Peaceful New Year to you all —