The start of a new season always has me scurrying to my closet to exchange one set of clothes for another. This time, though, it was the clothes in my mother’s closet that I found myself rummaging through.

I’d been thinking of new photos to post on the Kimmies’ Facebook page. I was tired of sepia-toned images of the four sisters taken anywhere from the 1920s through the 1950s. I felt it was time for a change. A change of emphasis. A change of color. A change of style. Even a change of generation.

I found myself thinking of my maternal grandmother — Lena Wojcik Louie. Lena wasn’t only the Kimmies’ mother, she was also their manager, chaperone, costume designer and dressmaker. Whatever clothes she made for one of her daughters she made for ALL of them — from suits to coats to day dresses to evening gowns. 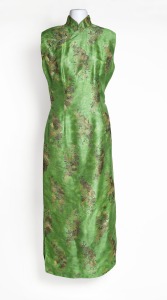 Lena was born in Buczacz, Poland to a family of farmers who lived on an estate owned by minor aristocracy. She and her sisters were seamstresses who made gowns for the ladies of the estate. Her brothers made leather boots for the gentlemen, as well as the music played at the concerts and fancy dress balls held there.

I can never think of my Polish grandmother without imagining her similar to the proverbial child whose nose is pressed up against the window of a candy store. Only in Lena’s case, I see her peeking through a crack in the door leading to the ballroom the evening of a fancy dress ball and witnessing beautiful women made more beautiful by the gorgeous gowns she and her sisters have made for them dancing to music her brothers are playing for them. I imagine that moment to be the seminal one when Lena’s life goal is forged: if she can’t wear the beautiful gowns she and her sisters make, her daughters will wear them. If she can’t dance to the music her brothers play, her daughters will not only dance, they will also sing, to music played just for them — and in America!

I can only imagine this dream of hers that made the child Lena into the woman she became: the mother of the Kim Loo Sisters and the driving force behind their success.

So when I reached into my mother’s closet a week or so ago and my hand alighted on a jade-green silk gown cut in the style of a Chinese chipao, I knew what the next photo on The Kim Loo Sisters Facebook page would be.

This gown was made by Lena in the early 1950s for my mother. The fabric is French silk which shimmers ever so gently, since it consists of the most gossamer overlay of bronze-gold floral embroidery floating over the jade-green gown itself, which is completely lined in the same color but whisper-thin silk. The Chinese touches are all there: the silk “frog” buttons, the asymmetrical closing of the bodice, the matchstick-thin silk piping, the “invisible stitching” by hand, the Mandarin collar. The garment is Chinese and traditional. It is also Western and completely modern. 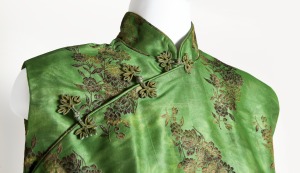 In the depths of my mother’s closet, I also discovered a black silk-satin evening coat that Lena made at about the same time (for my mother to wear to the same event?), together with half a dozen or so vintage silk chipaos made for my mother by Chinese dressmakers when she lived in Shanghai and Hong Kong in the late 1940s. The handiwork is astounding. It cannot be replicated. No state-of-the-art technology can create what the human hand and eye (and heart and mind) were able to master more than half a century ago.

Which brings me to a bit of synchronicity. A day or so after I posted two photos of Lena’s jade-green gown on the Kimmies’ Facebook page, I learned that a major exhibition will be mounted at the Costume Institute of the Metropolitan Museum of Art — “Chinese Whispers: Tales of the East in Art, Film and Fashion” — from May 7 to August 16, 2015. The artistic director of the exhibition is filmmaker Wong Kar-wai, among whose films is one of my all-time favorites, “In the Mood for Love.” I love it not only for its visual beauty and its tale of impossible love (all the more heartbreaking for the subtlety with which the theme is handled) but also because of the elegant chipaos Maggie Cheung wears throughout the the film.

I’m told that “Chinese Whispers” will present more than 100 examples of haute-couture and ready-to-wear garments along with decorative objects from Imperial China from the Met’s collection. If Lena were still alive, not only would she want to see the exhibition, she’d probably be wondering why some of her own exquisite designs aren’t included. (That’s all right, Nana. The clothes you made for the Kim Loo Sisters will be prominently displayed in the documentary I’m making about their lives.)

Autumn has just begun, and already there’s one reason why I’m looking forward to spring!