DOUBLE THUNDER, the sequel to BITTERSWEET 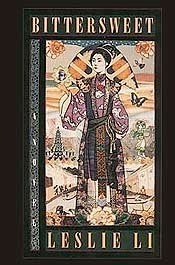 Having recently returned from six weeks in Bali where I was recovering from two years of pandemic-induced near-solitary confinement, I have a special announcement to make.  I have completed DOUBLE THUNDER, the sequel to my historical novel BITTERSWEET, which Tuttle Publishing published in hardcover and in paperback and Recorded Books rolled out as an unabridged audiobook. BITTERSWEET is based on one hundred years in the life of my paternal grandmother Li Xiuwen — the character Bittersweet in the novel. Towards the end of the book, Bittersweet’s two-year-old granddaughter Lisa goes missing. Infused with enough backstory to stand alone, DOUBLE THUNDER answers the question: “What happened to Lisa?”

It is my pleasure to introduce you to DOUBLE THUNDER by posting pages of the book every week or so starting this month, July.

Each of DOUBLE THUNDER’s interweaving chapters is written from the viewpoint of one of its four principal characters: Bittersweet, who embarks on a fateful quest to find her granddaughter Lisa based solely on a written confession sewn inside a silk quilt; Yuebing, the mute piano prodigy who is targeted during the Cultural Revolution for her “Western poisonous weeds”; Hardu, the oldest living ricksha puller in Shanghai who personifies both “a Chinaman’s luck” and “a Chinaman’s chance”; and Vera, the tenacious Polish pianist and Yuebing’s adoptive mother who settles in the last city open to Jews fleeing Nazi-occupied Europe..

There is a fifth main character— the city of Shanghai itself, “the Pearl of the Orient,” “the Whore of Asia” — from its spectacular heyday in the 1920s to its humiliating decline in the 1970s — where, by chance or by choice, the lives of Bittersweet, Yuebing, Hardu, and Vera, intersect and entangle, each transforming the other in the process and creating a collective destiny that is both unexpected and inevitable.

And now, the first installment of DOUBLE THUNDER.

Bittersweet stepped past Tanmin and into the street to get a better view. Had it not been the season for the airing of the siming blankets, she might have mistaken it for the fireworks set off during Spring Festival. She could name each one, even at her advanced age. Peonies Strung on a Thread. Five Devils Noisily Splitting Apart. Ten Explosions Flying to Heaven. But Spring Festival was months away, and the brilliant bursts of color—crimson shot through with gold, emerald green suffused with sapphire blue, bright orange softening into deep violet—were soundless. Not so much as a high-pitched whistle. Not the merest pop.

Instead of racing up to the sky and hanging suspended before falling back to earth, the ‘fireworks’ were flung from the railings of the many shops and houses that lined Folded Brocade Road. And there they stayed: siming blankets of all hues. What at first she had thought was proof of a new year—or the faulty vision and hearing of an octogenarian—continued unabated. Her neighbors were busily draping colorful quilts from their balconies, or hanging them on taut ropes tied between trees, or spreading them on tarpaulins laid on the ground in front of their houses to dry. The quilts of many colors that had warmed their bodies all winter long and into the cold, relentlessly wet spring were finally having their day in the sun, and their owners were applying themselves to the task as if they were home-bound children finally let out to play, or prisoners released from solitary confinement—with joy and abandon. Bittersweet closed her eyes and lifted her face to the sun.

“I promised Leung Tai-tai I’d pay her a visit after I finished my marketing,” Tanmin grumbled. “By the time I get home, our siming blankets will have missed a good two hours’ drying time.”

“I wouldn’t worry about it. The sun is warm, and the breeze is strong,” Bittersweet assured her nephew’s wife. “They’ll dry in no time.”

“Perhaps.” Unconvinced, Tanmin pulled her sunhat down low on her forehead. “But in our house,” she said as she set off, “we do things right.”

What she referred to was the more labor-intensive custom of opening the quilt covers, pulling out the silk batting inside—in a single layer if possible—and spreading it on the ground to dry in the sun. Wife of Bittersweet’s nephew Jiaqiu, Tanmin had formerly belonged to the throw-it-over-a-balcony-railing category, but as soon as she became an honorary member of the Li household, she was a staunch advocate of siming blankets aired the Li way.

Bittersweet closed the heavy red outer door, bolted it shut, and mounted the stairs to her bedroom, her steps made lighter by an idea: she would surprise Tanmin as well as keep a promise she’d made the previous autumn. She would lighten Tanmin’s load by subtracting one siming blanket from it—the lightest one, the one that Tanmin had absolutely no use for.

“You call that a quilt?” Tanmin had scoffed when she first laid eyes on it. “If that’s silk, it’s the coarsest weave I’ve ever seen. And thin as a sheet! How can a blanket that flimsy keep you warm during our damp winters?! You’re not living in New York anymore”—Bittersweet had had central heating there—“and the embroidery!” she snorted. “A child could have done better. Look at those thick, uneven stitches. But what’s worse is the design! A tree. A plum tree. That’s acceptable. After all, ‘plum’ is your surname. But gray clouds! A bad omen. And not just one cloud, but two! It looks like lightning is ready to strike that poor tree at any moment! If I were you, I’d get rid of the rag.”

Despite Tanmin’s objections, Bittersweet had used the “ominous” quilt, and no other, all winter long and into the spring. She’d considered setting a much thicker quilt on top of it, but once she snuggled under the gift from the blue-eyed Shanghainese, she was perfectly warm. In fact, the blanket seemed to adjust to whatever the temperature or humidity required.

She extracted the quilt from the cedar chest at the foot of her bed and slung her sewing basket over her arm. From the shed in the backyard, she pulled out a large tarpaulin—twice the size of the blanket—and set it on the ground next to her vegetable garden where the siming blanket would receive maximum sunlight. She bent down and spread the quilt on half the tarp’s surface. With a pair of scissors she snipped open one side of the quilt, then the threads—stitched every five or six inches apart—that held the batting in place. Squatting on her haunches, she reached deep inside the quilt, grabbed the edge of the batting at the far side, and slid it out onto the other half of the tarpaulin so smoothly it remained in one piece. There was something strange about it. She brought her eyes closer. She ran her hands over it. The batting wasn’t composed only of silk filaments. There was something else. Something bigger and denser. She adjusted her reading glasses and peered again. Silk rectangles the size of playing cards, cream-colored, flecked with black, and thin and filmy as gauze. Perhaps they’d been used to anchor the stitches holding the batting more firmly in place. Upon closer inspection, she saw that the flecks weren’t an intrinsic part of the fabric but handwritten Chinese characters too small to make out, even with her reading glasses on. She ran her hands over and under and through the silk batting and found more rectangles—one for each of the stitches she’d snipped to free the batting from the quilt. Each rectangle, she discovered, was in fact eight rectangles, each rectangle the same size and connected to the other seven by a single stitch of cream-colored thread. After making sure she’d done a thorough job, she counted them. Seventy-two sets in all. Five-hundred seventy-six silk sheets.

Bittersweet gathered them up, placed them in her sewing basket, mounted the stairs to her room, and locked the door behind her. She had installed the lock after she returned from living in the United States for fifteen years. There, privacy was a custom she had quickly adopted and which she saw no reason, now that she was back in China, to forego. She picked up the large magnifying glass from her desk—the one she used to read the daily newspaper—and walked to the open window where the morning sun was streaming into her room. She held one of the sets of tiny silk sheets under the glass and adjusted the distance until she could make out the ideograms on the first sheet. The largest ideogram was a number—64—liu-shi-si—written in the center at the bottom of the sheet. She flipped through the eight sheets in her hand. They ranged in number from 64 to 71—qi-shi-i. The numbers were sequential, like the pages of a book. She spread all the sets out on her bed, and then she gathered them together sequentially, first to last, all seventy-two sets. What she held in her hands looked like a small book. Or a diary. For a while, she merely stared at it. Then it struck her that what she’d been given by the blue-eyed Shanghainese, in addition to a siming blanket welcoming her back to China, was a written object that had lain dormant inside the quilt hibernating all winter long, just waiting for the first sunny spring day when she would open the quilt and discover its hidden contents—the real gift for which the quilt was merely a container—or perhaps a disguise.