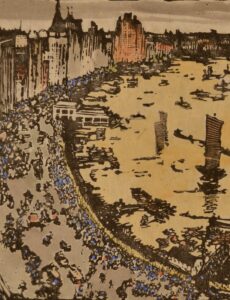 Welcome to the third installment of DOUBLE THUNDER! The story picks up where it left off at the end of installment #2: Bittersweet learns about Hardu’s life as a ricksha boy and petty criminal—and much else besides—after finding his letter sewn inside a siming blanket.

My years with the Hardoons were short-lived. When my adoptive parents lost interest in our education and then in us, we found ourselves scattered to the four winds and the backstreets of Shanghai. In the 1920s those streets were an exceptional albeit rigorous school of life. I spent a year as a tailor’s apprentice. (Proof that I possess a modicum of sewing and embroidery skills is evident in the siming blanket I gave you.) Afterwards I joined the tens of thousands of men who pulled rickshas around Shanghai—twelve-hour shifts at sixty-five coppers a shift. Home was a shed crammed with six or eight bunk beds. Meals were taken once a day: day-old bread or cake soaked in weak tea. Given such grueling work undertaken on a starvation diet, three days’ work required one day’s rest.

On my days off, I often wandered across the Boulevard des Deux Républiques in the French Concession to Nantao, the old Chinese section of town—its alleys smelling of night-soil-filled “honey carts” and rancid cooking oil—to visit the gaudy shops and eateries and even gaudier temples. Or I meandered over Garden Bridge into Hongkew, where an opium den sold “meng yao”—dream medicine—for a few coppers a pipe. There I would find some of my skeletal, exhausted colleagues under the influence of the pretty pink pill, dreaming of beautiful women, good fortune, happiness, longevity—everything they would never have. In fact, we ricksha boys would be lucky to live to the age of forty. Not even half that age, I wanted better for myself. One, and perhaps the only, benefit of my profession was that I knew Shanghai’s streets intimately, every alleyway, every lane, every cul-de-sac. So while I remained officially a ricksha puller, I wriggled my way onto the payroll of Tiny Du and his Green Gang, collecting and delivering meng yao instead of passengers. Pulling a cache of pretty pink pills hidden under the passenger seat was lighter—and more lucrative—than hauling a heavy-set guailou.

Bittersweet slipped the silk sheet behind the others in her hand. She thought, with equal amounts of impatience and interest: Why is he telling me this? What does his life story have to do with me?

Every Saturday afternoon I took myself to the Shanghai Race Course. I went there to mingle with the milling, jostling crowds of British, French, Americans, Russians—all eager to place a bet or make a wager on this horse or that, their bulging pockets and purses just waiting to be picked. I was quick of eye, nimble of finger, and fleet of foot, and so I was naturally adept at collecting other people’s booty without their noticing. One of my near-victims—a portly English colonel, retired—required his own private ricksha boy once a week for a few hours. I was young, vigorous, willing, and I spoke English, so he hired me at twice what I was making pulling passengers (when not transporting meng yao). I was used to serving as a human beast of burden and a conduit for drugs, but this was the first time I’d be transformed into a polo pony. Advanced in age and large of girth, my new master and his cronies, all who had once been agile polo players on horseback, now squeezed into the backs of rickshas—in one hand a polo mallet, in the other a bamboo switch, which they laid liberally on our backs as prod or punishment.

My degradation at the hands of my English master didn’t stop at polo, which was just one of the national pastimes the British had exported to Shanghai. The second—fox hunting—was an even more peculiar activity, especially since there were no foxes in Shanghai to hunt. Never mind. Wearing a red ruff around my neck and set free half an hour before the hounds were let loose on me, I served as the fox. Eventually, the hunt masters came up with a greater challenge—part hunting, part point-to-point racing. It was called the Shanghai paper hunt. As head paper hunt boy, I accompanied the colonel, who was head hunt master, and six other Chinese carrying bags of colored paper. Together we laid out the five- to ten-mile trail. We threw down patches of paper every few hundred yards. Green paper indicated bridges where the hunt had to stop. Purple indicated wades, and so forth. Some sites were given colorful names: Rubicon Creek, The Bath Tub, Coffin Jump, Slough of Despond. Needless to say, the farmers whose land and crops the huntsmen and their horses trampled were irate. My heart went out to them. As soon as I could, I switched allegiance and collaborated with the farmers, rerouting the trail and laughing till my sides ached at the hunters’ confusion as they raced into stinking ditches, swollen streams, and stagnant swamps, sometimes requiring reinforcements from home to pull them out.

When my part in these misadventures was found out, I was sent packing. Now I was back full-time in Tiny Du’s employ, taking time out every so often to relieve guailous such as the colonel of their thick billfolds whenever I could. Working for Tiny Du, I learned some of the thinking, tactics, and tools of the trade of the underworld. I learned that I could be a more efficient pickpocket with a handkerchief sprinkled with a few drops of ether in my hand and a sheer silk stocking pulled down over my face. By the time my victim regained consciousness, I’d already disappeared deep into one of Shanghai’s hundreds of lanes and alleyways. Even if he went to a police station to file a claim, he’d be at pains to identify me as the person who had robbed him.

Turning to the next page, Bittersweet was surprised to see that she arrived back at page one: she had read all eight sheets. She snipped the thread that bound the next set of pages together and wagged her head—not so much in disapproval of the letter writer’s criminal activities but of her curiosity to know the story of his past.

Your sense of right and wrong, your innate need for justice, will now be rewarded, Li Tai-tai. I was finally apprehended, but not for picking pockets. My moderate success at petty crime had gone to my head, and I began choosing bigger fish to fry than wealthy, rotund Shanghailanders. I decided I would take on nothing other than the Hong Kong and Shanghai Bank, that august bastion of British financial power in the East. My scheme was simple and, I thought, foolproof: I would plate a few taels of brass with silver, convert them into Shanghai dollars at the bank, then reconvert the dollars the following day into authentic silver taels. Unfortunately, each of my brass taels weighed 25 milligrams less than the real article. Before I could bolt for the door, a bank guard was escorting me outside where I was handed over to a constable. I found myself in the municipal jail, where I would stay until my trial came up in Mixed Court, yet another confirmation of the superiority of the West, where the cases of Shanghainese—Chinese who lived in Shanghai—were heard, as opposed to the Municipal Court, where cases of Shanghailanders—foreigners living in Shanghai—were decided.

My cellmate in the municipal jail was a thief and a robber who had eluded capture for years because of his uncanny ability to disguise himself. He could discard one identity for another by altering the contours of his face, the shape of his eyes, the color and texture of his hair, the set of his ears, the addition or removal of a mole or scar, all while matching each new identity with the appropriate tone of voice and manner of speech, even the appropriate personality. For the several days that we shared the same cell, the man of a thousand faces regaled me with stories of how he had surgically and chemically altered himself, creating not only new identities but the many lives he had crafted for himself because of them. When he’d finished describing the often gruesome details of his corporeal artistry, I asked him:

“Have you changed other people’s faces besides your own?”

“When we’re both released from prison, will you alter my face?”

“What is it you want done?”

“Not much. Single lids instead of double ones is all.”

He sniggered and said, “That’s a strange request. Young women with single lids have come to me for just the opposite. They want round eyes. They consider Western eyes more beautiful. The Mingxing certainly does. Why do you want to look more Chinese, when as you are you can easily pass for a guailou.”

“Why do you think I’d want to pass for a foreigner, or even be one?”

“I’m not proud of my foreign blood. In fact, it’s a source of shame.”

The man of a thousand faces shrugged. “All Eurasians are ashamed to be Eurasians, considering how they’re regarded by Chinese and Westerner alike. But single lids won’t make you any more Chinese than double lids make you a guailou. Not with those baby-blues of yours. I bet they bring people to a dead stop. But if you want single lids, I’ll give you single lids. Just wish me a light sentence.”