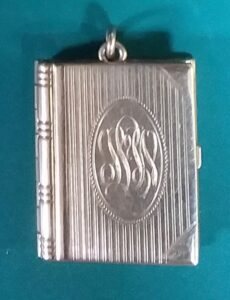 This installment will be short and sweet. It also concludes Chapter 3: VERA. If you recall, in Installment #10, Vera Polsky takes up the pen (or calligraphy brush!) and continues Hardu’s letter to Bittersweet. She introduces herself as Lisa/Yuebing’s adoptive mother and paints a vivid picture of her life in Nazi-occupied Poland, her last-minute escape to Shanghai, and her trials and tribulations there as a stateless refugee during the Sino-Japanese War (1937—1945). How a beautiful, cultivated, and intrepid Polish pianist crosses paths with a Chinese ricksha boy/drug runner/pickpocket is described in this installment. Why she chooses to step onto Hardu’s path will be revealed in subsequent chapters of DOUBLE THUNDER.

Image: This locket plays a brief but important part in the novel. The initials on the cover are those of my grandmother’s romanized name Li Shoa-wan (in Wade Giles), on whom the character Bittersweet is based.

One day, pass in hand, I slipped on my jacket with its hateful blue and white badge and headed to work. Though the weather was sultry, I walked briskly, chafing each time I passed one of the signs, ubiquitous in the ghetto, that read: “Stateless refugees are forbidden to leave here without permission.” When I heard the faint hum of planes, I didn’t even glance upward. Several seconds later, a siren went off, then another. These too I ignored. It was well-known that Shanghai’s early warning system was a misnomer: the city’s sirens sounded only after planes appeared in the sky. There was a second reason to pay no attention to them: ever since the United States had come to China’s defense against Japan, American aircraft always dropped their bombs on the outskirts of the city, far from Hongkew.

So I was surprised to hear a sound I’d never heard before—a high-pitched whistle, then a deafening roar—and a sensation I’d never felt before—the shaking of the earth beneath my feet strong enough to knock me to the ground. Instinctively I covered my head with my arms just as bits of debris rained down perilously close to me. Again there was a shrill whistling sound, fainter than the first, followed by a thunderous boom that made the ground where I lay tremble but not so violently that I couldn’t push myself to my feet. I took off for the nearest doorway. There, my arms and legs akimbo against the doorframe, I waited for the bombing to subside. I was practically blinded and suffocated from the acrid-smelling smoke. When the bombing ceased and the smoke and dust settled, several people ran across my field of vision in the direction of Chusan Road. I found myself running with them past the marketplace, which had been reduced to smoldering rubble. People were rummaging through the remains searching for their loved ones, calling their names: Xiaomei. Chaim. Katerina. Guoxin. Pierre. Eiko. Only then did it dawn on me: the planes had bombed Hongkew. The war had come to Hongkew.

SACRA, the acronym for the Shanghai Ashkenazi Collaborating Relief Association, was a refugee assistance organization housed in a building on East Yuhang Road. I took off after him, but I turned off in the direction of Ward Road when I saw the bombing’s first casualties. They were mostly Chinese who, either under their own power or aided by a friend, relative, or kind stranger, were headed in the direction of the prison there. Guards had opened the prison gates, and doctors were setting up a makeshift operating room in the courtyard. Three braying ambulances nudged the crowd aside to deliver the more critically injured. Dazed by the bombing, stupefied by what I saw all around me, I wandered among the clusters of doctors and nurses—all foreigners—who were administering ether, injecting morphine, suturing wounds, amputating limbs, and closing the eyes of the dead.

A woman grabbed me by the shoulders. By her uniform she was a nurse; by her accent she was Polish, but she spoke to me in French, perhaps because of my fashionable dress. Then she slapped my face twice, hard.

“You’ve got better things to do here than faint.”

She picked up the mountain of blankets and pillows at her feet and shoved it into my arms.

“Distribute these. And we’re running low on bandages and dressings. When you’re done, run home and strip your bed. Strip any bed you can get your hands on. Then bring the sheets here and start tearing them into bandages. If we can stop the hemorrhaging, we can save some lives.”

I nodded dumbly and picked my way gingerly around medical teams, the wounded, and the dead, who were removed from the courtyard as soon as they expired. The stretchers on which they’d lain, which were vastly outnumbered by those who needed them, were immediately filled with fresh replacements. When I’d tucked my last blanket and placed my last pillow, I ran home. Thankfully it had been spared by the bombing raid. I pulled the linens off my bed and grabbed my one extra set from my dresser drawer. Then I ran back to the prison courtyard where I began tearing them into strips, willing the sound of ripping cotton to muffle the cries and groans all around me.

A child, Chinese, unconscious and no more than three years old, was set down on a recently vacated stretcher a few feet away from me. I took off my jacket and tucked it around her thin, malnourished body. I wadded up a few of the bandages I’d been making and slipped them underneath her head riddled with ringworm. When I cradled her skull in my hand, I felt a warm, viscous liquid coat my palm. I first thought, fearfully, that it was blood. But when I opened my palm slightly, still cradling her head, I saw that it was colorless. It was seeping from the back of her skull, a fragment of which had come away in my hand, revealing a sliver of the soft, pale brain—like a coddled egg—where a shard of the thin shell had cracked and peeled away. I slid the bit of bone back into its original place and sat on my haunches. My hand, still holding her head, was trembling, which caused her head to move as if she were nodding in gratitude or compliance. I held the bit of bone against her cranium to seal it off, to prevent any more of her brain from leaking onto the cobblestones, hoping that it would adhere, that it would reknit instantaneously and that her skull would be whole, that she would come back to life, that the bombing had never happened, that I was on my way to my perfumed candle shop that was reaping the rewards of my hard work and business acumen. When I shut my eyes, my ears stopped hearing as well. The shrill screams of the ambulances and the wailing of the wounded they had delivered were smothered by silence, a silence so total that all I could hear thudding against my eardrums was my heart. The skin all over my body had contracted, tight as the skin over a drum, numbing it, so that all I could feel was my heartbeat, the rhythm of it, the resounding of it. My heart in mourning. My heart broken. My heart broken wide open.

When I opened my eyes again, nothing had changed. Everything was just as it had been when I’d arrived in the courtyard. The dead, dying, and wounded still surrounded me. The doctors, the nurses, the ambulance drivers, the volunteers were still working feverishly against time, against the odds, against all reason. But for the first time in the nearly four years since I’d come to Shanghai did I see them—the snobbish English, the skittish French, the volatile White Russians, and especially the Chinese whose preliminary aloofness towards us youtairen had turned into outright antagonism now that we had to share the same tight living quarters—not only as my neighbors but as my fellows, with me as one of them, as one with them, and them as part of me. For the first time since I’d come to Shanghai, I felt, I knew, that Shanghai was my home. The Shanghailander and the Shanghainese alike, they were my people. The city that had never been my home, could never be my home, did not fit the definition of home, did not fulfill the emotional requirements of home, nonetheless was my home. Shanghai was the home I’d been searching for all my life. Not only that, I knew that it would always be my home.

A man passed in front of me, nearly stepping on the little girl from whom I had just withdrawn my jacket that she had no need for. He was hunched over, his hands thrust deep into his threadbare jacket pockets. He stood hovering near a medical station that had been set up a few yards away from me. I saw one of his hands dart out of his pocket and just as quickly dart back in.

“That man!” I yelled, rising to my feet and pointing to him. “Stop him! He’s stolen some medical supplies!”

Immediately the thief was surrounded by several men, a few of whom had to restrain him when he tried to flee. One of them found the booty in his pocket—two vials of ether and a roll of bandages—and waved them in the air. Just before two kempetai shackled his hands together and led him away, he looked at me. He was clearly Chinese, but his eyes were blue. The blue of those eyes was riveting, unearthly, even in a Caucasian. But it was the look he gave me with those blue eyes that I will never forget. It struck me then where the two Japanese military policemen were taking him. Bridge House. It was as good as a death sentence.