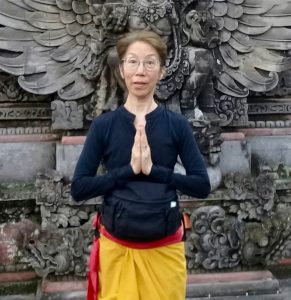 Many apologies for the long silence.  I’ve been to Hong Kong and Bali and back — physically, that is.  Mentally and emotionally, I am half still there and half in New York, where I’m working on completing The Kim Loo Sisters documentary.  I’m also deep into a new writing project — one that blurs the boundaries between novel and screenplay — that I’m very excited about.  More about that in a future post.  But about Bali…

This was my third visit to the island and the highest of my Bali Highs.  The reason for the trip was to  spend time with my son and his family who’d moved from Seminyak, on the southern coast, inland to Ubud, the cultural, spiritual and artistic center of Bali.  Having lived in parts of Europe (Paris, Rome, Acireale, Sicily) and Asia (Beijing, Shanghai, Hong Kong) for a good part of my life, my greatest pleasure these days (and even back then) are the everyday, ordinary things that people in any country do during the normal course of their day.  To buy groceries.  To cook a meal together.  To eat a meal together.  To take an after-dinner walk together.  To take care of and play with a child (in my case, my granddaughter) together.  To share a conversation together (especially during a leisurely dinner).  The operative word is “together.”  It is the common and communal experiences in life that get a gold star from me (who can be found most of the time absorbed in the solitary and austere pleasure of writing and reading, generally fictional works).

I’ll begin this very short pictorial tour of my Balinese sojourn with the final photo (at right) I took before heading back to the States: the rice paddies near my cottage.  I passed them every day on the back of my son’s motorbike on our way to the center of Ubud.  The photo of me (above) was taken at a temple right across the street from the paddies.  And there are temples everywhere!

In town, at the King’s Palace in Ubud, we watched a Legong dance — an episode from the Mahabarata.  I was blown away by this solo (below) — the incredibly articulated and expressive movements of eyes, head, neck, shoulders, arms and fingers (much more expressive and varied than the legs and feet, as in western dance).  And the gorgeous costumes!

When my son suggested that we visit Lovina on Bali’s north coast to visit his parents-in-law and see another aspect of the island, my answer was not a completely enthusiastic yes, since my mode of transportation for the 3-hour trip would be on the back of his motorbike.  Hiring a taxi, he assured me, would take twice as long, given the state of the roads and the amount of  traffic on them.  So, after a rather harrowing motorbike ride full of hairpin turns and a heavy downpour, we crossed the mountains (a lush micro-climate of deciduous and coniferous forest and gargantuan ferns — a temperate Shangri-La) to the northern coast of Bali where we spent three delightful days in Lovina.  The sunsets were spectacular.  Here’s proof (below), though you really have to be here to get the full 180.  On the

return motorbike ride from Lovina (where we spotted at least three dolphin pods) to Ubud, we crossed the cloud-enshrouded mountains to catch a view of Mount Batur and its blue, blue lake on the other side (below).

By the way, Mount Batur is a sleeping volcano.  I had thought Mt. Batur was extinct!  Thankfully, it was asleep — so too was Mt. Agung (but dreaming), though it had been threatening to wake up and erupt big-time a several months ago.  Ubud is far enough away that my son and his family didn’t have to evacuate.  But it was rather touch and go for a while.

Directly below is what my brain looked like in Bali.  I call it my Bali brain. I also call it my Lovina lobotomy.  Yes, technically it’s a piece of brain coral that I picked up on the beach in Lovina, but metaphorically it’s my Bali brain, my Lovina lobotomy.  I asked my three-year old granddaughter what she thought it was.  She said it was filled with “flowers and stars.”

On my last full day in Bali, since she lives a 5-minute motorbike ride from my son’s house, I decided to book a session with Wayan Nuriasih, the same healer that Elizabeth Gilbert consulted and wrote about in her memoir, Eat Pray Love. A 5-hour (!) visit that included a rapturous treatment by a medicine man/massage therapist, chanted blessings, purifications of body, mind and spirit, and a bag of herbal remedies (below) to take home to New York. Makasee, makasee, Wayan!  Do you have something to stave off the wistfulness I’ll be feeling until I return to your beautiful island to visit my far-flung family?

Thanks to you all for returning to my webpage despite the long silence between this post and the distant last.  I hope you enjoyed this little travelogue and that it was worth the wait.